The foundation stone for St Mary’s Church was laid 3rd July 1937 by Bishop Poskit on land donated by the Calverley family of Oulton. It was designed in a modern Romanesque style by Charles Fox and had a baptistry at the west end and south west porch. Internally it boasted an apsidal sanctuary with an oak reredos and baldachin, with a seating capacity (originally) of 200.

The building of the church was completed by the end of the year and officially opened in time for the Christmas midnight Mass. The estimated cost was £2400!

Major Calverley made a further donation when he had two oak trees felled from the Calverley estate at Oulton and sent them to Germany to be carved into the statues of The Sacred Heart and Our Lady and Child which stand on each side of the chancel arch. 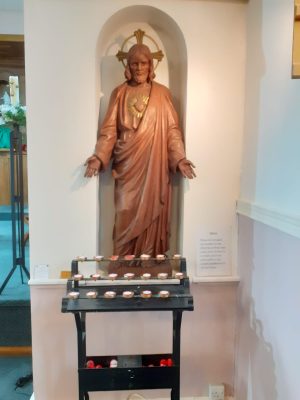 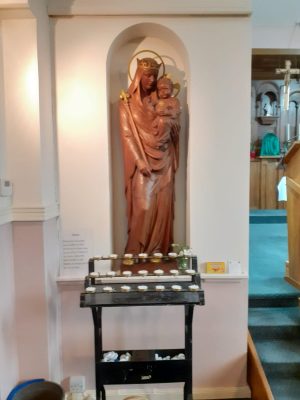 Rothwell St Mary’s Primary School was opened in September 1964 at a cost of £40000 and designed to cater for 160 pupils. It has become a centre of excellence being awarded Outstanding status by Ofsted and continues from strength to strength

The church community has continued to grow and in many ways alter as the economic life of Rothwell has moved from its coal mining roots to become a commuter “village” serving the large surrounding cities with its excellent transport links.